Words from the Heart

A daily e-devotional sent to your inbox every morning.

Words from the Heart is a daily e-devotional brought to you by Bob Beasley, Bible League Canada’s Chief Ministry Officer.

Each morning you will receive a daily verse, short reflection point, as well as a 3-minute podcast and written devotional. All in one email!

Subscribe now to start receiving Words from the Heart.

We pray this e-devotional encourages your daily walk with God as you start your day with Words from the Heart.

Words from the Heart can also be heard twice daily on UCB radio stations across Southern Ontario at 8:20am and 5:20pm. Please visit the UCB Canada website to locate a radio station near you. 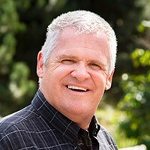 You can listen to a sample podcast right here:

Words from the Heart for Friday December 2nd, 2022

The true light that gives light to everyone was coming into the world.

You’re likely familiar with Niagara Falls as the home of Canada’s most famous natural wonder, but the view is made even more breathtaking during the holidays—thanks in part to over three million twinkling lights in over 75 spectacular displays. Founded in 1982, the Ontario Power Generation Winter Festival of Lights is the country’s biggest illumination festival. This year, the festival will be split into two parts, with the first half featuring 3D animal and holiday-themed displays and the second half following Christmas into the New Year.

We don’t have to look far these days to notice that there is a lot of darkness in this world. According to the Council on Foreign Relations there are currently 27 conflicts taking place in the world. Social networks make it more and more evident that the world is far from the Biblical standards of righteousness and purity. Natural disasters and poverty both seem to be on the increase. Political polarization and racial strife are rampant, along with greed and corruption. It has always been so. There is a spiritual darkness in our world. But there are points of light and have been for two millennia. This is what Advent is all about, after all. We read this in John 1:9: “The true light that gives light to everyone was coming into the world.” The story of the first Christmas is filled with light breaking into the darkness of the “night watch.” Jesus has stepped into the world. He is the great illuminator, the great beacon of light. He is the promise that no matter how dark the world seems, day is coming. Jesus is the Light that outshines the darkness.

These have been words from the heart.
Bob Beasley

Subscribe today to begin your daily walk with God