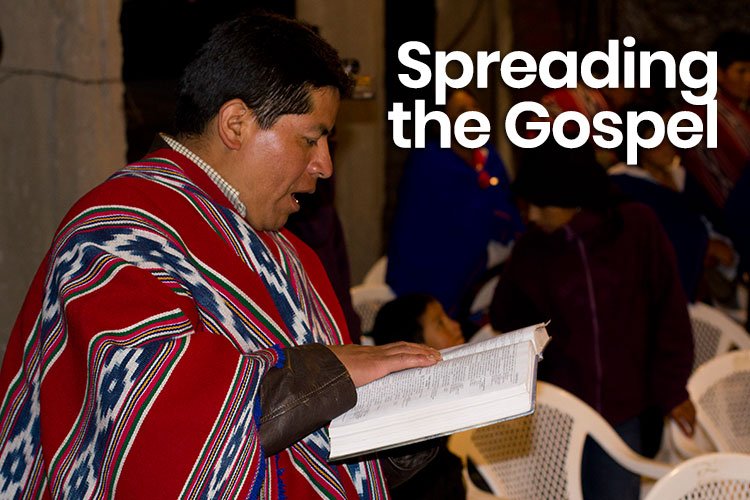 Roberto is part of the indigenous Shuar people group and lives in a community deep in the Ecuadorian jungle. His home is accessible on foot, by four-wheel drive or by air. No one arrives at this remote location without planning and great determination.

Guillermo, a local champion trained through Bible League Canada’s ministry partners to start new churches, was determined to reach the village where Roberto lived with the Gospel. He wanted to be a witness.

Two years ago, Guillermo arrived at Roberto’s community of Juyukamentza to talk about Jesus. At first Roberto doubted what Guillermo taught and wondered how this person could teach them about Christ when he didn’t even carry a Bible.

Nevertheless, Guillermo not only developed friendships with Roberto and many other people in the village, but he also earned their trust. When it was time to leave, he said he would return again soon.

In just a few weeks, Guillermo returned to the community, and this time with the Word of God – in their own language.

Hearing the Bible in their native Achuar, the people could now fully understand. Guillermo shared the gospel with Roberto and taught everyone the important truths of Jesus’ sinless life, sacrificial death and His miraculous resurrection! It was then Roberto came into relationship with Jesus.

“I thought I was already a Christian before Guillermo came to our village. But I continued to participate in the parties and drinking with the people in my community. They had no reason to believe I was a Christian. I wanted to be a witness, but my actions made that difficult.” It’s now been two years since Roberto let go of his doubts and began to live a life empowered by God to live differently.

Guillermo has been there to help Roberto through many challenges, and has thankfully had the benefit of training with Bible League Canada’s Starting New Churches materials. “With the materials we have received, we are learning and then doing the work,” Roberto says. “Even though it is sometimes difficult, we continue and are planning to take what we have learned to other villages.”

“We are teaching in other areas and we are preaching the gospel,” Roberto shares. In addition to preaching the Word, Guillermo is actively training leaders in the village of Chinkianentza, his home village. After these new leaders, like Roberto, have completed all of the training modules, they will continue to go to other communities that have not yet heard the gospel.

Roberto is now an important partner with Guillermo as they go to new communities. Roberto invites Guillermo to talk to his friends so they can hear about Christ. They both continue to learn and prepare themselves to take the gospel to the communities in the jungles of Ecuador to places where the light of the gospel has never been seen.

They are “witnesses unto the uttermost,” Acts 1:8.