The Romani people, also known as the Roma people, are one of the most marginalized groups in Eastern Europe. They are often viewed with contempt as many consider them to be poor, with little social skills and inappropriate behaviours.

Globally, the Romani can be found in many countries, but one country stands out as the home of the Romani: Romania. With an official population of nearly 700,000 Romani and estimates putting that number much higher, the Romani make up about 3.5% of the population of Romania. Yet many of these people are living on the fringes of society with little access to education or employment. 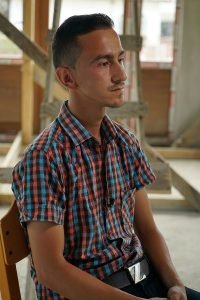 In some Romani communities, such as a village where a local champion Daniel lives, many women and children live in abject poverty. They struggle to clothe their children and often sleep with as many as ten family members in a single room. Their only source of income is usually government assistance while many of the men in the community are forced to seek employment as migrant workers in other countries to support their families. But Daniel is working to bring transformation and healing to the Roma people. At only 25 years of age, he is the pastor of a church and he is working to introduce his community to Jesus.

The church in which Daniel is serving began under the leadership of his father-in-law who had received training through a Bible League Canada ministry partner in how to start a church. When he was just a teenager, Daniel’s father-in-law had brought him along to the training sessions. It was unclear at the time why the pastor would bring Daniel with him, but God’s purpose in those actions was revealed when his father-in-law passed away last year. Because of Daniel’s training, he was prepared to take over as pastor and the church has continued to grow in spite of a situation that may have caused other churches to close.

Through his training with a Bible League Canada partner, Daniel learned that the best way to reach the people of his community was to learn the needs of his community and work to help address those needs. Since that time, Daniel has ministered to some of the worst members of his community: alcoholics, drug addicts, and violent, dangerous people. But fear doesn’t stop him, Daniel has seen God change the heart of the Romani in his village in such a profound way that it has caused others to question how such change could occur.

Now, Daniel’s congregation is working to construct a new church building to house their growing congregation. The church began seven years ago with only a handful of members but has now grown to have around 100 members. Their prayer is that this new building will be filled with people.

Through your support, children in the community have received New Testaments written in both Romanian and English. While many Romani are bilingual, learning English opens many doors for young people in this community. Having access to a New Testament in both languages is helping address a major need in their lives and increases their willingness to read the word of God.

The needs of Daniel’s community remain great but the continued hope is that his entire community would be introduced to Christ and that they would see that He is the living God who wants to have a personal relationship with them.