Maalavi was an educated, happily married mother of 3 children, well respected for her no-nonsense attitude and devotion to her work with the Police Department. She had an illustrious career and her family, tradition, and religion were the main foundations and joys of her life.

But Maalavi was stuck on one unanswered question, “What is my destiny after death?” 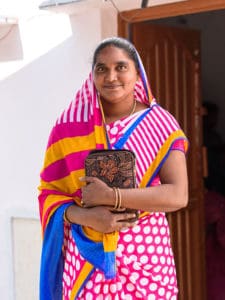 This question troubled her from her childhood. Throughout her life, she searched for an answer. As she grew older, fear began to grip her as well.

Maalavi knew about Christianity, but thought of Jesus as a foreign god. When she encountered Christians preaching the Gospel she immediately made them stop and move on. She believed Christians were only interested in fooling innocent people and making money from conversions. Her position in the community made her a terror to local Christians. Evangelists feared preaching in her village. No one dared to approach her with the Gospel message.

Maalavi appeared to have success, happiness and respect. Yet inside, she had no peace, no joy. When people commended her for her strong convictions, it only underscored how weak and troubled she felt inside. Her question continued to disturb her, “What is my destiny after death?”

The answer came from a local champion named Pahel. Their journey started with friendship. Given Maalavi’s history of persecuting Christians, it was a great challenge (and a brave leap of faith!) for Pahel to share about Jesus with her. It took many months to develop a good relationship.

Slowly Pahel started to share what the Bible said about eternal life, and that Jesus is the only way to heaven.

Pahel gave her a Bible and when Maalavi began reading, the words deeply touched her heart, and her fear began to fade away. The answers in the Bible resonated in a way that nothing ever had before. She finally had the answer to her question! She received Christ as her personal Saviour and was baptized.

Her transformation astonished her family. She began to share her testimony with them and pray for them. Once a hindrance to Gospel preaching, now Maalavi is the open door for the Gospel in her village, inviting in visiting evangelists, and anyone who wants to hear this Good News. She has become a blessing to many, happy to answer their questions!

By reaching one person, the door to sharing the Gospel to an entire community is now open!