Sonya is a 15-year-old girl who lives with her grandmother, uncle, and her mother in her grandmother’s house located in the Armenian town of Dilijan. Sonya’s father does not live with the family because he decided to leave her mother because she has epilepsy, a condition that she acquired during Sonya’s birth. Sonya learned the reason for her parents’ divorce as a child and has blamed herself for their situation ever since that moment. The weight of her guilt and shame caused Sonya to withdraw into herself and become very introverted and isolated.

Sonya’s grandmother is one of the Armenian Evangelical Church members in Dilijan and tried to bring her granddaughter to church. When her grandmother and other members tried to convince her to attend, Sonya at first refused. Her grandmother did not want to accept Sonya’s refusal and continued to encourage and pray for her. That ongoing encouragement and prayer, and of course, the church servants’ efforts eventually moved Sonya to join a church-sponsored, home-based program and to begin to attend a Sunday school for teenagers. 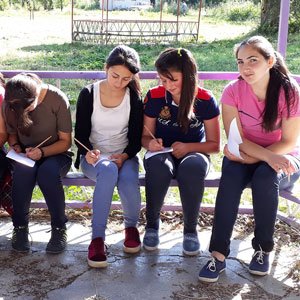 In August 2017, she heard a call to repentance while taking part in a summer yard camp organized by the church. At first, she was nervous about stepping out and responding to the call, but after a lengthy discussion with a church leader about repentance, Sonya overcame her nerves and through the leading of the Holy Spirit, she repented and began a relationship with Jesus.

Today, the change in Sonya’s attitude is startling. She is noticeably friendlier and more sociable than she was in the past. Recently she agreed to be included in the “Choose Life” program held at her church and is enjoying the closeness of the faith community there. She is full of questions about God and His miracles, her passionate curiousity no doubt fuelled by her thoughts about her mother’s condition. Her devotion to God and understanding of His ways is constantly growing through these questions, leading her to greater faith each day.

One day, feeling guilty for her mother’s sickness, Sonya wondered aloud if God could cure her mother. She sought out the church leader who had spoken to her at length about repentance. Another lengthy talk ensued about the power of God, His miracles, and prayer, leading Sonya to declare that she would pray for her mother continually since doctors are unable to help her. “My only hope is in God, who can do such miracles.”

Please join Bible League Canada in praying that Sonya’s mother’s health would improve. Though, doctors say it is nonsense to talk about her mother’s cure, we strive to do as God says in Proverbs chapter 3 verse 5: “Trust in the Lord with all your heart and lean not on your own understanding.“