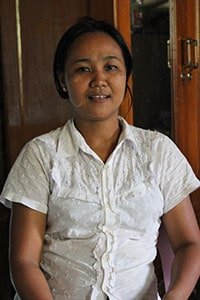 Dani was a Buddhist nun in Myanmar. She was collecting offerings in her community when someone put a Christian tract in her offering bowl. Even though she had an eye problem, Dani read the tract and learned that Jesus died for her.

She knew that a Burmese pastor funded through Bible League Canada had come to town, so Dani invited him to visit to explain about Jesus. Dani lived near the church, and every night she could hear the Christians singing about being forgiven in Jesus. They also prayed for her eye, and she was healed! As a result, she placed her faith in Jesus and became His follower.

However, Dani’s family no longer recognizes her as a family member and have cut off her inheritance, which means she no longer has any right to the family’s land.

In spite of all this, Dani testifies about the great peace and joy the Lord has given her, and she has a burden for her family’s salvation. Although she has lost earthly property, Dani has gained heaven!