God’s Word Does Not Return Void

God’s Word Does Not Return Void

U Nay Tun, a believer from Myanmar, battled cancer for years, being diagnosed again and again. He was diagnosed with cancer three times before meeting a follower of Christ who shared the Word of God with him. That encounter “changed my life tremendously,” recalls U Nay Tun.

When this follower of Christ met with him, he encouraged U Nay Tun and prayed for him, leaving Gospel tracts and a New Testament. U Nay Tun learned that his sins had been forgiven! Growing up, he had been taught that he needed to do many good things in order to be free from bad karma, so this was life-changing news! 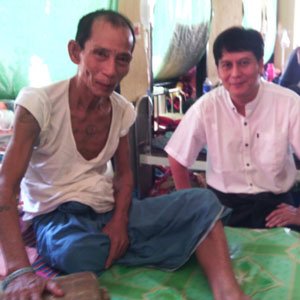 He also learned that God was not keeping score to decide whether He would accept us, love us, or bless us. He just did those things. The Christ-follower explained that through Jesus’ death on the cross and resurrection, we can be forgiven and set free from the condemnation and bondage of sin and only by His blood could we find healing. “What good news for a dying patient like myself. These truths were an enormous blessing to my heart, body, and soul! I decided to put my faith in Jesus Christ,” he says.

Today, U Nay Tun owns a Bible and constantly meditates on it. He no longer feels condemned or ashamed and has stopped living in fear of death. Since those early days, he has begun to understand God’s love for him and has seen how God has greatly improved his life.

At sixty-two years of age, U Nay Tun now has a Heavenly Father! By the grace of God, he is cancer free, and has witnessed family members’ lives transformed by the Word of God. Reflecting on it all, he says, “My eyes have been open to God’s grace and I will never go back to my old beliefs and ways of life. All honour, glory, and praise be to our Lord Jesus Christ!”

Praise God indeed! We join with U Nay Tun in praising God for using your generosity to train and equip local champions and believers with tools like Gospel tracts in order to reach the sick and those in need.