Tonya was born in Ukraine to a family of believers. Her childhood revolved around church activities, but the older she got, the less her faith in God mattered to her.

The moment she was legally an adult, Tonya left both her home and her faith behind, seeking a life of pleasure instead. “I didn’t deny myself anything,” she says. She began to live recklessly going to party after party. She married and had children, but she didn’t want the party to end. It wasn’t until she divorced and remarried that Tonya began to reconsider her position on God. 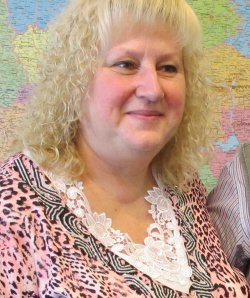 During her second marriage, Tonya noticed that her health had seriously declined. She decided to go to a doctor to see what was wrong. Doctors prescribed various treatments but nothing worked. Fearing the worst, her thoughts turned to what would happen if she died and she felt compelled to return home to her parents.

Initially, Tonya felt ashamed in returning to her parents, but their loving actions made the days pass quickly. Before she left, her parents gave her a pamphlet about God. “The pamphlet interested me,” she recalls. “For many years, I refused God. I forgot everything that I knew about God. I took the brochure and read it from beginning to end, over and over.”

The pamphlet opened a floodgate of emotions and questions. She had felt self-sufficient her whole life and thought she didn’t need God’s help. But Tonya’s illness had reminded her that nothing lasts forever, something had to change.

Tonya prayed and asked God to forgive her and heal her. After days without miraculous healing, Tonya began to read her Bible. God showed her that He had answered her prayers in the way He saw fit. Instantly, she understood that though her body was still sick, her soul had been healed.

Tonya no longer worries about her health. Today, her heart is full of peace resting in her Saviour’s love.