Twice a week, Tanya brings her son Bogdan to swimming lessons. But when the pool closed for lockdown, the instructor suggested outdoor calisthenics instead so that he would not lose his training. Bogdan and another boy, Marko, continued to train twice a week. 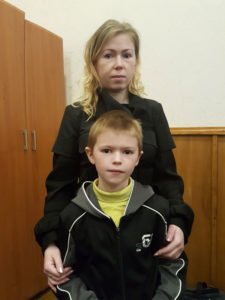 While waiting during these lessons, their mothers got acquainted. And the more Tanya listened to Anna, the more she realized that God provided this meeting.

Anna has lived a life full of challenges. She married a wealthy young man, with expectations of a fairy-tale life. But reality was very different. Her wealthy husband was also brutal and self-centered.

Alcohol, women, and abuse drove Anna to take her young daughter and move to Kiev. She was starting from scratch. Eventually she met her second husband, and soon gave birth to a son. But when Marko was just three years old, Anna was diagnosed with cancer.

Over the next six years, Anna endured 22 chemotherapy sessions and several surgeries. But Anna was dying – nothing was helping. In her home, they made everything ready for a funeral, including the casket.

Although she had no relationship with God, one day she prayed desperately at the cathedral, “God, help me. I have two children to raise. Only you can help me.”

And — a miracle! After this desperate prayer, her symptoms began to disappear. Anna had so many questions! A neighbour suggested that she go to a house nearby and talk to the believers that gathered there, but she was afraid.

When Tanya heard this story, she knew that this meeting must be God’s next steps for Anna’s faith journey.

Anna offered Tanya and Bogdan a ride home. When they arrived at Tanya’s house, Anna looked at her in surprise, “This is the house where they talk about God. During my treatments my neighbour told me to come here to have my questions answered. I want to know what is going to happen when I die. I want to know why God had mercy on me and healed me. I have never read the Bible. I know that God is changing me, and I do not understand what is happening.”

Because of your support, Tanya was able to give Anna a Bible. They meet together with other believers to study and talk about faith in Jesus Christ. Anna’s journey continues!