From Crime to Hope

From Crime to Hope

The stories that John shared with Brandi seemed unreal. He told her of a life of addiction, crime, imprisonment and hopelessness. A life full of decades of destruction. Yet, before Brandi’s eyes was a new man, a new creation full of hope.

“How could the man sitting in front of me be the same man of these horrific tales?” Brandi remembers asking herself. “The only answer was Jesus and the transformation He can bring into lives.” 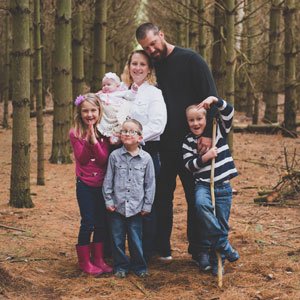 When Brandi met John, she quickly fell in love with him. John was caring, compassionate, strong, funny and most importantly, John loved Jesus. The more they were together, the more Brandi would imagine their future together. She couldn’t wait to spend time with him!

Six months after they met at a Bible study, they were engaged. Six short months after John’s proposal, they were married. Now, they are parents of four amazing children!

John was once incarcerated in the Canadian prison system. While incarcerated, Christians reached out to him through a ministry partner of Bible League Canada and a discipleship and advocacy ministry for prisoners and their families.

“John has said that the courses offered really challenged him and took his faith deeper and deeper,” says Brandi. “A Biblical foundation was laid for him that has been a gift not only in John’s life but also in our children’s and one day our children’s children!”

John loves to share his testimony and speak to others about the power of Jesus. “Often, people will ask me how John is as a husband and father,” says Brandi. “The truth is, I could not ask for a better role model for our children and a more sacrificial husband. The way John loves Jesus is impacting our marriage and the way our children are raised.”

The foundation that was laid for John while he was in prison is truly changing generations, including John and Brandi’s children.

“Our oldest, seven-year-old Eden, loves to sing and help lead worship whenever she can,” says Brandi. “Our son Isaiah is six and he loves to ask questions about the Bible — he often comes up with great wisdom from Scripture. Jonah, our second youngest, loves people and often prays for them. Our baby, Hannah, is just a year old but her God-given smile can change hearts!”