Finding Jesus in a Dorm Room

Finding Jesus in a Dorm Room

Darene came to the University of Alberta from Senegal to study international business, but she graduated with something far greater than just a degree: a lifelong relationship with Jesus Christ.

“God spoke to me so much through His Word while I was at university,” Darene says. “I now know there is so much in His Word for me and I want to share it with others.” 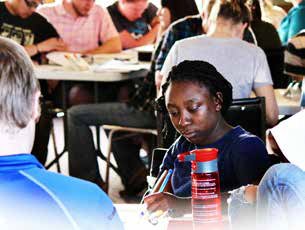 Darene was just 18 years old when she arrived on campus. By the end of her first week of university, the student members of the Inter-Varsity Christian Fellowship had connected with Darene and quickly became like family to her. “They’ve been so supportive, always there to help me through any struggle or difficult issue,” she says.

“Back home, I knew who Jesus was, but I never really understood that Jesus loves me until I came to university,” says Darene. “I feel like I have come to know God on a personal level.”

Weekly Bible studies became part of Darene’s rhythm, and as she grew in her faith, her Christian friends encouraged her to take on more responsibilities. Challenged by an Inter-Varsity campus minister, Darene began leading Bible studies, first with other students who were Christians, then with non-believers, too.

Over the past five years, Darene has led four Bible studies specifically oriented towards students on campus who don’t know Jesus. Darene has also participated in two of Inter-Varsity’s Mark Manuscript study camps. Held each May, these week-long camps immerse students in 40 hours of intensive community Bible study in the Gospel of Mark or the Book of Genesis. Bible League Canada partners with Inter-Varisity to support more international students being able to attend these studies.

Inter-Varsity has been hosting these camps for more than a decade, with approximately 500 students involved annually at seven locations across Canada. At these study camps, Darene and her fellow students reflected on passages of Scripture independently, then gathered together to discuss what they were learning. “Studying Scripture in community is a beautiful experience,” reminisces Darene. “Studying and discussing it with friends opens up your mind.”

They would also spend time praying together about whatever Biblical truth was arising from the passage. Sometimes they listened as the Bible stories were read out loud. Other times, the students acted out the Biblical stories. This experience was significant for Darene.

“I remember acting out the story of the bleeding woman who touches Jesus’ clothes and is healed,” Darene recalls. “I was immersed in the story. I could feel her pain. I cried as Jesus gave her back her value. It was so powerful.”