Alina had never heard of Jesus. She was raised by her grandfather, who was a shaman healer. When she was 20 years old a friend convinced her to see The Jesus Film. About halfway through, Alina was going to leave to visit her sick mother in the hospital. Then these words spoken by Jesus penetrated her heart, “Come unto me all who are heavy laden and I will give you rest.” 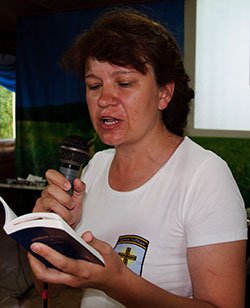 The next day, Alina went to church. “A month later I repented, and then I was baptized.” She adds, “On the day I was baptized, God healed my mother from cancer.” As a result, her mother began to believe in Jesus and was later baptized.

After graduating from Bible school, Alina and another Christian woman went to a village 600 miles away to spread the gospel to the people there. They faced opposition from a group of shamans who threatened them. “Some started to yell at us and call us names. One almost beat us with his fists.” Fearing the shamans, no one would rent space to the women. But they persevered, first meeting in a barn and then a home.

The threats continued but God gave Alina the strength to stand strong and continue her work. Even men coming to her door carrying knives was not enough to stop her from inviting them over for tea and sharing God’s word with them.

The unreached people had not heard of Jesus before but they were accepting the message. “We baptized 36 people, but many were not able to withstand the pressure of the shamans and moved away after accepting Christ,” says Alina.

God has shown his faithfulness as the women have been kept safe many times from attacks of the shamans. Alina says, “We continue our ministry of expanding the Kingdom of God.”