Nadia’s mother battled excruciating kidney stones for two long years. At the same time, Nadia’s father suffered from an agonizing stomach problem. With the little money they earned as labourers in the cotton fields, Nadia’s parents tried everything they knew to find healing.

They visited medical doctors, witch doctors, shrines, and temples, and performed all kinds of worship for their Hindu gods. Nothing worked, and they went bankrupt in the process. In desperate pain, with no money and no will to go on, Nadia’s parents were planning to commit suicide. They had hit rock bottom.

Then, eight-year-old Nadia heard about a year-long Children’s Bible Club nearby. She went with her cousins one day and, becoming emotional while hearing the Bible stories, she explained her parents’ situation to the Bible Club leader. 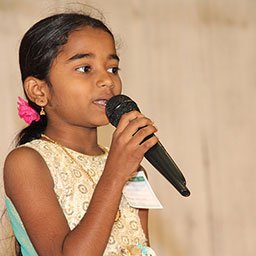 After listening to Nadia, the Bible Club leader went to see her family with a local pastor, Sadik, who had helped establish the Bible Club. Though Nadia’s Hindu father had once opposed Sadik’s Christian teachings, Sadik made a suggestion. “You have tried everything,” he said. “As a last option, why don’t you pray to Jesus?”

A week later, Nadia’s father told Sadik that they felt peace after his prayers, and asked him to visit regularly. Meanwhile, Sadik and his worshipping group prayed for the couple.

Nadia’s parents were healed! They joyfully received Jesus as their Saviour, were baptized, and inspired many of their extended family members to join a worshipping group!

By the grace of God, Nadia’s father now works in a hospital, earning much more than he did before. After scoring well on a test conducted by an area school, Nadia was awarded a free education!

The family praises God for blessing them in so many ways. Nadia continues to grow spiritually through the Bible Club and her Sunday school class, while her parents are regular attendees at a worshipping group.