One of the world’s youngest countries, South Sudan has been torn apart by a deadly civil war since 2013. Tens of thousands of people have lost their lives to the conflict, while many more have had to leave everything they knew.

Nearly two million people are currently displaced within South Sudan while another two million have been forced to flee to neighbouring countries. Many people seek to escape, traveling for days on foot through grueling heat and thirst in order to find refuge elsewhere. Bible League Canada’s own ministry partners were forced to leave a cache of Bibles and scripture materials behind when they had to flee their country recently as a result of increasing instability and violence. 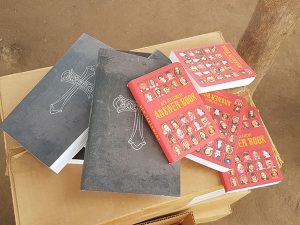 Some time later, those same ministry partners traveled from Uganda to Juba, South Sudan to retrieve the Bibles and materials they had to leave behind. By the grace of God, they were able to make the dangerous journey into Juba and return safely with 2,800 full Bibles, 15,000 New Testaments, and thousands of other resources that will now be used to minister to the South Sudanese people living in refugee camps across Uganda.

The journey to recover those resources was arduous for our ministry partners and it took an emotional toll as they made their way across the bleak vistas of a land ravaged by civil war. They faced many struggles along the way and at one point their fuel was robbed. Due to the increased instability in the region, travel is rife with danger and safety can be hard to secure. Often there is no choice left to aid workers and people traveling through South Sudan but to pay soldiers to secure safe passage. We thank God for his protection over them as they made this difficult, but critical, journey.

Our ministry partners continue to work among the 1.6 million South Sudanese refugees living in Uganda but their prayer is that the Lord will open the door for their safe return to South Sudan.