A Treasure Beyond Measure

A Treasure Beyond Measure

For over thirty years, the Pwo Karen people of Myanmar have longed for the Living Word of God to be accessible to them in their own language.

They have been persistently asking for Bibles to be printed in their native tongue for just as long. Your support made it possible for Bible League Canada to fund the printing of 25,000 Bibles for these people. These Bibles are now being distributed among Myanmar’s Pwo Karen people.

Thanks to years of missionary work there is now a sizeable Christian population among the Pwo Karen, but the need for Bibles remains great as many believers do not have access to a Bible of their own in their native language. 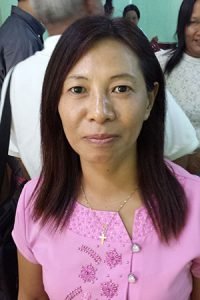 Mya is one of the believers who has received a Bible from the last round of printing. The following account is her testimony:

“My name is Mya and I am a nurse and a widow. It has been seven months since my husband passed away.

I was not raised in a Christian family. Growing up, my family had many difficulties which burdened my heart. But then I met my husband and we were married. My husband was a Christian. He knew my burdens and he introduced me to Jesus Christ. For the first time in my life, I felt inner peace

I shared my experience with my non-Christian family and in time my parents and my four siblings became Christians as well.

Earlier this year, I suffered a sudden paralysis of my left leg. I tried to get treatment many times, but nothing worked. So I determined that I would seek the Lord for three days. During those three days, I read the Bible, fasted, and prayed all day. By the end of those three days, the Lord had fully healed me making me able to walk again.

In light of what I experienced, my favourite scripture is 1 Peter 2:24 (NKJV): ‘He Himself bore our sins in His own body on the tree, that we, having died to sins, might live for righteousness—by whose stripes you were healed.’

I am extremely grateful to all the brothers and sisters who provided for our Pwo Karen Bibles. May God bless you all.”